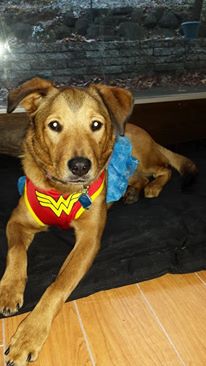 I was supposed to write the blog post for last week. You may be thinking, “Last week? What was last week’s post?” Or you may be thinking, “We were missing photos of Lola!” Because, yeah, my post last week was a photo of my dog sniffing a can with an OGS can coozie on it. Deep thoughts there.

I could have felt guilty and rebounded with an opus of legal opinion. However, that’s not what’s going to happen. Instead, we’ll learn together this week. I had a busy week last week. I took on too much and did a poor job of delegating. We have more than just me here at OGS, and they have not let me down. And yet, in spite of that, I kept thinking, “No, I can get it done.” And clearly, I couldn’t. At 1:00 am, I messaged Jeff saying “Take a photo of Lola to post for tomorrow.” I finally admitted that I had bitten off too much.

So, it was arguably a fail. But, to my luck, I had two lessons presented to me last week, as well. One was the Wisconsin Technology Council’s Entrepreneurs Conference (one of the things on my overloaded plate), and they had a panel discussion titled “It’s OK to fail, especially if you learn from it: What those who have cratered would change if they could do it over again.” The panelists bravely talked about their failures. Two big messages from that panels were: 1) Listen, listen, and listen. You don’t have to follow everyone’s advice, but listen to what people are saying and choose wisely, and 2) Failure happens. That isn’t necessarily bad, unless you don’t learn from it.

The second was that I had just finished the book Be Obsessed or Be Average by Grant Cardone. There were lots of things of which I didn’t agree with the author. But, one of the take away messages was that the only unacceptable failure is the one that you don’t learn something from. So, that’s TWO messages in a week saying the same thing. Even I realized that I should listen to that.

What did I learn? I foreshadowed it above. We have a good team. That is my biggest strength. As Susan Thomson told me over wine, I need to get a team AND use them. I am not so special that only I can do things. This is often a very hard lesson for business owners to learn. You cannot do everything. Delegation is a skill and one that should be honed. So, I listened and learned and will implement better delegation skills in the future.

Everyone is served better if we are a team. It’s not only OK if I have others do work; it is better for everyone involved if I delegate well. And, the same is true for your business, too. I promise it’s true. I also learned that Lola is still our #1 social media draw. Straight to the top. Perhaps we should delegate even more to her.